In 2017 I flew from Michigan to California to climb Mt. Shasta with my friend Matt. The plan was to camp at altitude to accelerate the aclimation process and do a summit push the next day. It was an ill fated expedition for myself as I woke up on summit day with a splitting headache and was sick at 9,000 ft. While I was happy to be back at the car after shuffling down the mountain at 5am, it’s weighed on me for a while now. After building some mountaineering skills and fitness over the last few years I figured it was time to take another crack at one of Californias few 14ers and this time bring my skis.

After doing the Haute Route, and reading about a guy who did a Mt Hood speed run in minimal clothing/gear I was sold on the fast and light technique. This meant forgoing the acclimation day and doing a 1 day summit push. This meant 7,000ft elevation gain but much less gear and fussing with said gear. I had done a gravel bike race 2 days prior in the area around Mt. Shasta, I figured that would count for a bit of acclimation. 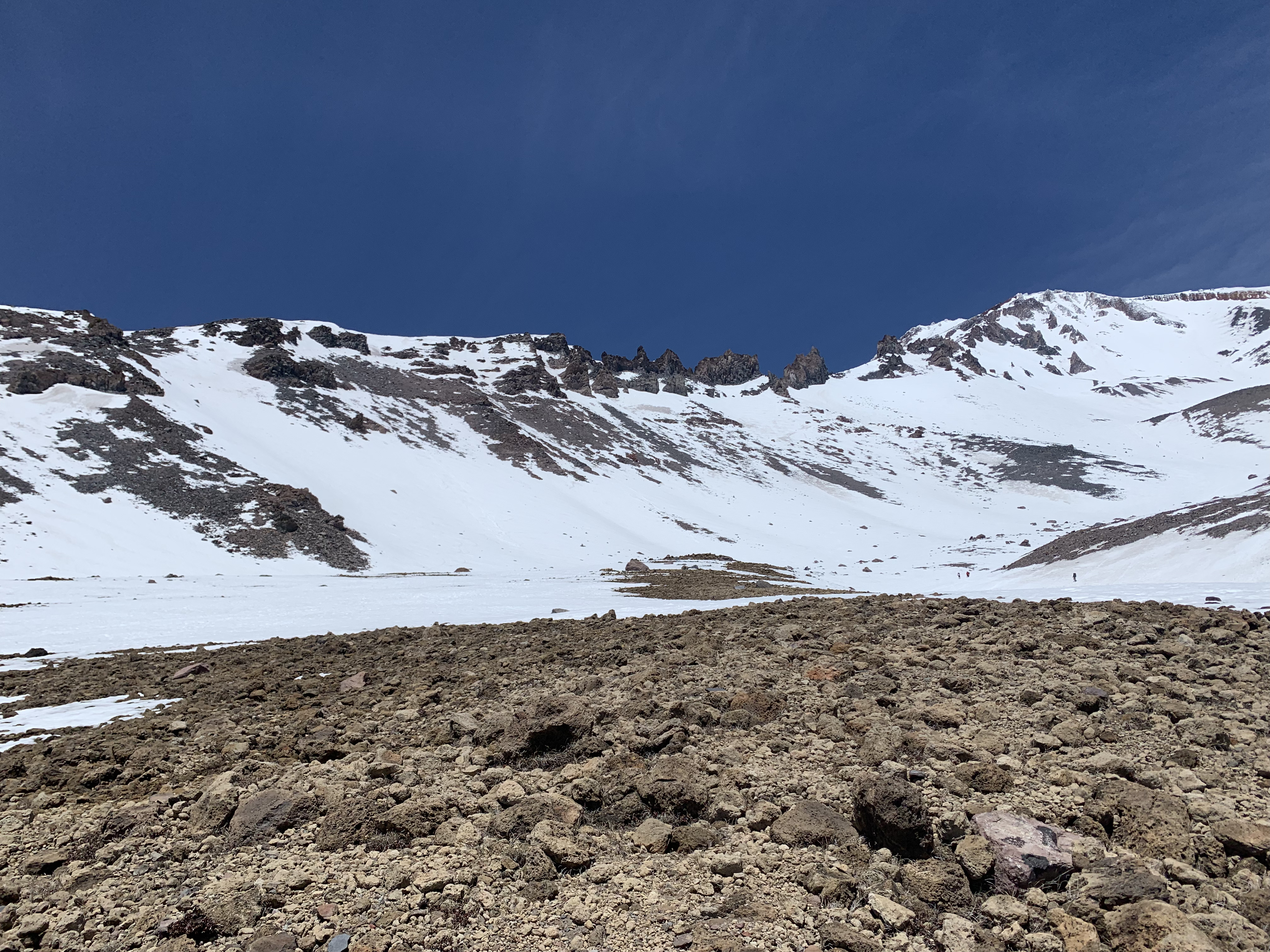 I figured a recon hike the day before would give me a good idea of the conditions and spot where I would transition to my ski boots. Mt. Shasta has a few glaciers on it but the Avalanche Gulch Route which approaches the mountain from the South has none. After hiking up about 2 miles and chatting with a few other skiers coming down after their summit I felt pretty good about the conditions and settled in for the night.

When my alarm went off at 2am I was really not in the mood. My twin air mattress felt like a Temperpedic and I layed there for a bit. Eventually I found the motivation to get moving and brave the brisk air outside. It was Monday morning and there wasn’t much activity at the trailhead. I set off alone up the trail and was feeling good. I had some tunes going and was in my soft running shoes making good time towards the ski boot transition point. I passed the Horse Camp hut and from this point could see a few headlamps high up on the mountain. These were people who had camped at the high altitude Lake Helen the night before and were pushing for the summit early in hopes of watching the sunrise.

I reached the snow and began the skinning on the hard bumpy snow. I had figured this snow would grip like the Mt Hood skinning I had done recently and had chosen to leave my Ski Crampons at the car, as the slope pitched up I was slipping and sliding every other step. Cursing myself for not bringing this special tool that was exactly the thing I needed now, I was getting a bit worried about how the other 5-6k feet would go. Eventually the sloped pitched back down as I headed up towards Helen Lake.

Just above Helen Lake I looked back to see the sun hit the valley below me and could just make out the headlamp of one climber heading up far behind me.

The pitch of the slope above Helen Lake quickly increased to an angle that would require boot crampons. While I stopped to transition and have a bite to eat the hiker below me caught up and I got to chat with him for a brief time. We would end up playing tag the rest of the ascent to the lower ridge, from there we would hike to the summit together. It was nice to have a companion for conversation and safety as well, these fleeting mountain friendships are special but usually over very soon, especially since he was purely on foot and I would be skiing down.

Coming above the ridge I would meet a few climbers glissading down from the summit including the folks that witnessed the sunrise from the top. It was still early morning and the sliding must’ve been quite rough. We came up to “Misery Hill” and found a nearly dry proper switchback trail, the first of the entire climb (mostly the avalanche gulch hike is taken straight at the lower ridge). After Misery Hill we were a bit confused and consulted our maps as a few peaks are visible and it’s not clearly visible which is the true summit. Eventually we found our way North, passing near a gas vent close to the summit. The smell was very noticable and I began to think the encroaching headache was more due to sulfur inhalation than lack of oxygen. 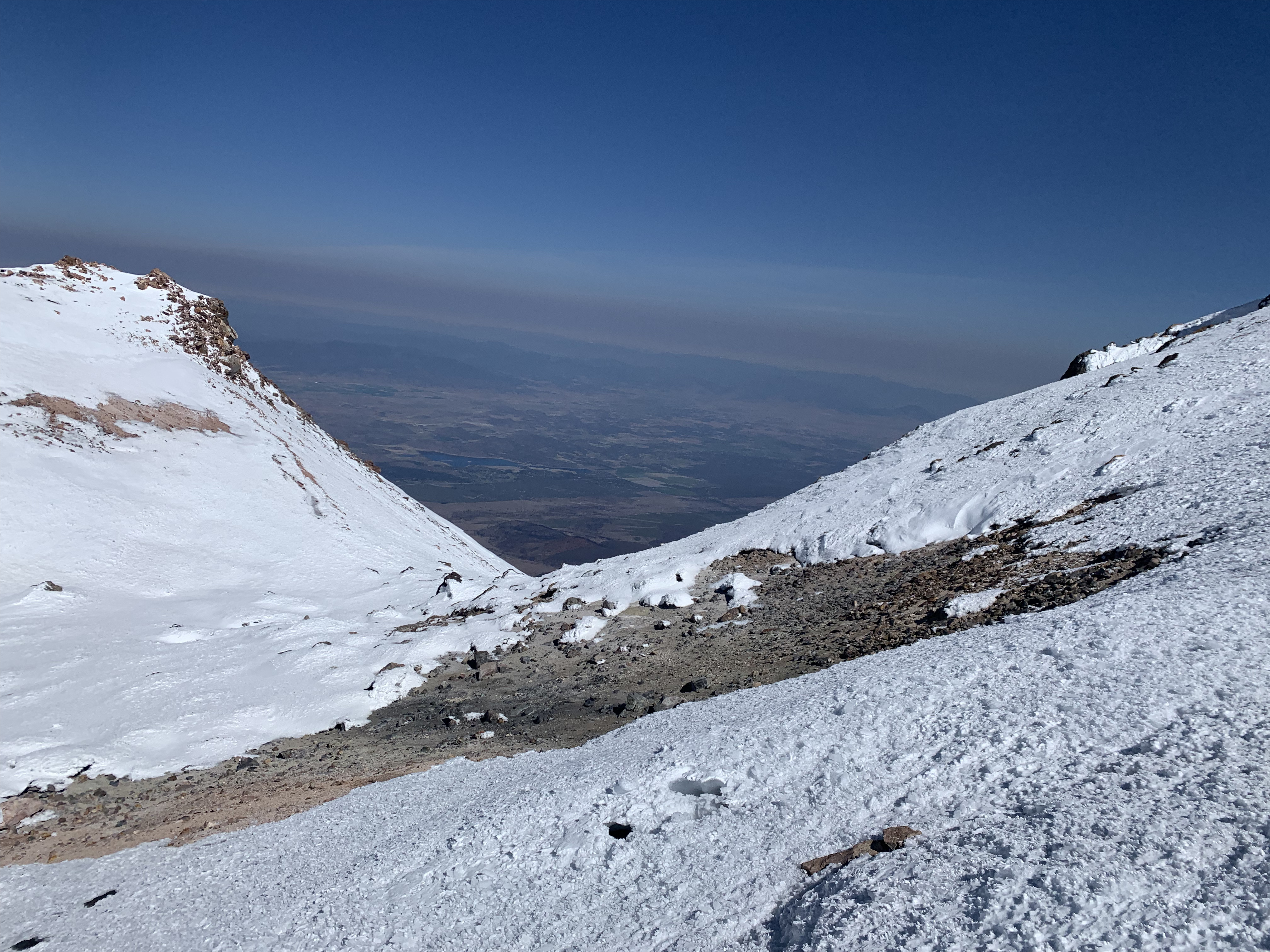 Soon we hooked around up the final ridge to the summit and enjoyed hazy mid morning views in every direction around northern California. Mt Shasta is incredible in it’s isolation from other large peaks and it felt like we were in a hot air balloon at 14,180 feet in the sky. It was 9:30am, I was pretty happy with my timing and wouldn’t have to worry about hurrying down the mountain. It was very windy at the summit and I didn’t like the way my skis on my back would catch the wind so my buddy and I exchanged summit pictures and parted ways to descend the mountain. He had a long way to climb/slide back to the trailhead and I had an exciting much anticipated ski line to choose. 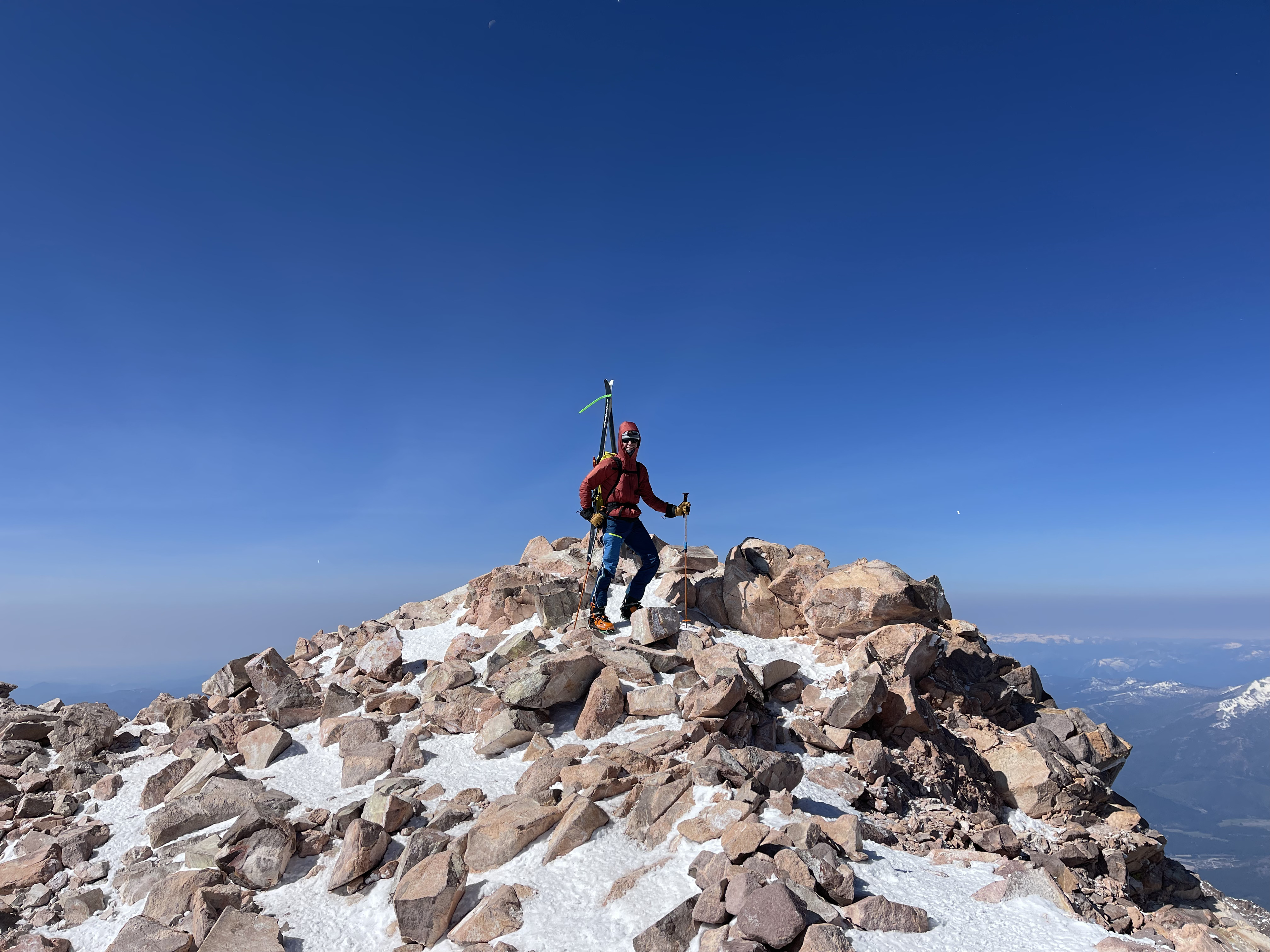 From the summit down to the lower ridge the conditions were rough. “Bulletproof” is a ski term I would ascribe to those high altitude conditions and I chattered my way down through the lower ridge chutes, grateful to be moving so quickly. Eventually I found my way West to smooth open slopes that had caught the sun earlier in the day. My quads certainly did not have the juice to do 6k of skiing continuously so I would find small rock patches to wait beneath to catch my breath.

Eventually I had descended to the sweet spot altitude where the snow was soft and slushy and began to transition from safe skiing to party mode, much to the chagrin of the late morning hikers heading up the gulch. After cruising through maybe 2k of slush I was back at the end of the snow field where I had been at 5am that morning. My feet were grateful to be out of the ski boots and into my wide running shoes. Soon I was bounding down the trail towards the trailhead and a hearty lunch.